The bravest CEO move ever?

The bravest CEO move ever?

Imagine, you have just been appointed the CEO of a national company. You have the qualifications and business experience to do the job, but you have NO experience in this particular industry. It’s our very first conference in the new company, and you stand up and deliver a beautifully rehearsed speech and eloquently highlight your controversial nine-point plan. Your speech finishes and you ask if there are any questions? (this is where it gets scary) You get nothing. Silence, tumbleweeds could have gone past and no-one is making eye contact with you. The silence is deafening.

What do you do?

If you are like most people, you would simply move on, make an excuse for the lack of engagement and congratulate yourself on a well-delivered speech. Next item on the agenda, move on.
That is not what happened at a conference I attended recently. Richard was the newly appointed CEO. He was in this exact position I’ve described, and he chose not to take the silence as a sign that everything was OK. He knew some of his ideas were unpopular and he wanted to have the debate about the merits of his new plans. He pushed back. He probed for questions and still, nothing. Eventually he started asking individuals in the crowd what they thought, and eventually, he got the reason for the silence. One brave young lady from accounts finally stood up and said, “it doesn’t matter anyway. Nothing in this company ever changes and management aren’t interested in what we have to say.”

He didn’t know it at that moment, but Richard had inherited a Passion Vacuum. Decades of “us and them” management, apathy and distrust had created a culture of learned helplessness. This helplessness breeds a particularly noxious form of apathy. It breeds a “why bother?….nothing is going to change!” mentality. Apathy is what happens when you have no “care factor.” You get an assumption that things won’t change and so “why bother?” It appears as if everything is OK, no-one is yelling and screaming and no-one seems too stressed. Why? Because caring is hard, particularly when you keep running into walls. Eventually, our self-preservation mechanisms kick in, and it becomes easier and less stressful to stop caring.

So what did Richard do that was so brave? He listened as a few people agreed with the “why bother” mentality and asked for a show of hands who was feeling this way. Almost everyone raised their hands, all except other high-level managers. After hearing a few horror stories of mismanagement, Richard made a decision: “If this company is going to go forward, we need a clean slate.”

He came down off the stage and explained to everyone that he is throwing out the agenda and it’s time to wash the dirty laundry. The next two hours were both uncomfortable and exhilarating. All the elephants in the room were addressed, and by the time it was finished, the entire room had 100% bought into the 9 point plan and was eager to move on. By embracing the stress of the situation, he got people talking again. Companies stall when passionate people go quiet.

As humans, we are biologically programmed to avoid pain, seek pleasure and to do so in the easiest way possible. The workers in this company were avoiding pain by choosing apathy over improvement. They had been burnt by caring in the past. They had tried to improve things, and it fell on deaf ears. They didn’t want to get burnt again, so they stopped trying. This is the basis of learned helplessness. Avoid caring, and you won’t get hurt.

There is a behavioral economics phenomenon called the Ostrich effect that works in a similar way. Studies have shown that people are less likely to look at something if they perceive it to be bad news. Investors look at their portfolios significantly less in bear markets than in bull ones.
So, what do a lot of CEOs do if there is negative feedback from staff and the culture is being degraded? They ignore it; it’s easier to ignore something that they haven’t seen yet. They don’t ask, and eventually, people stop telling.

Not Richard, he copped the lot, he absorbed all the blows. Everyone was heard and ideas that had been kept quiet for years finally saw the light of day. People were no longer struggling with learned helplessness, and the culture of the entire company improved instantly. The conference eventually got back to the agenda, and the entire group was happier and more engaged. Richard’s stock went up. He was no longer seen as the enemy, and change is something that is now embraced in the entire organisation.

Being aware of the Ostrich effect is the first way to stop its harmful effects. The impact of learned helplessness does not cause immediate, obvious stress. Instead, it causes a long-term, toxic stress that festers under the surface of an organisation. The only way to fix it is for leaders to be brave and face the stressful issues head-on.

Remember, short-term stress is beneficial and can be utilised to develop resilience and self-belief. It’s the toxic, long-term stress (due to the Ostrich effect) that needs to be avoided.

Showing bravery to take on the challenging issues is what makes real leaders. Just like Richard.

PrevWhy Meditation Doesn’t Work
Is your business partner lucky to have you?Next 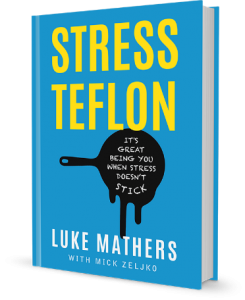